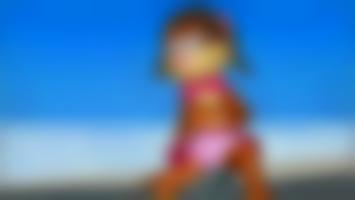 Cindy, the Sandy`s niece, arrived at the beach and noticed one of Plankton`s sons was on her favorite seat. So, Cindy asked him to leave her seat but he refused, she asked again but threatening him now to beat him the same way her aunt Sandy did with his father on a fight they had some time ago at the Bikini Bottom, he will say no again and Cindy instead of beating him, will try to make he leave by farting on his face, he will not leave so she decides to sit on him. After turning him into her seat, she notices that he inflates when she farts on him, so she decides to pop him with her farts.

Click here to donate and you will become a VIP member! Get access to private posts, private animations and much more!